Boat trip from Venice to Padua

In a land rich in water, the experience of sailing from Venice to Padua is ideal for learning about its thousand-year history, extraordinary natural environment and its living traditions. Sail along the ancient waterway between Altino, Venice and Padua in a ‘bragozzo’, a traditional lagoon boat and reexplore an ancient culture of water and islands, artifacts of hydraulic engineering, villas and gardens, as well as the immortal works of masters such as Giotto, Palladio and Tiepolo.

The Venice Lagoon by boat

From Altino you start along the Canal Santa Maria and arrive in the lagoon. The banks of the fishing reserves, the shores of the islands of the lagoon: Torcello, historic cradle of the Serenissima, and Burano, island of fishermen and lace shops. The landscape is ever-changing and quite out of the ordinary.

Glimpses of nature and culture among squares, calli, canals and gardens in the Castello district
The SlowVenice guide welcomes you on a journey, accompanied by us, to explore the Castello district, where the Arsenale is situated. This was the largest shipyard in the Middle Ages, where thousands of specialist workers – the so-called “arsenalotti” – and their families worked. Castello is still a densely populated quarter and provides quite an unusual perspective on the city and a point of contact with the daily rhythms of its inhabitants. Crossing through the gardens of the Biennale to the end and then stroll along Riva degli Schiavoni to San Marco.

Venetian Nizioleti: saoneri (soap makers), caegheri (shoemakers), remeri (oar and oar-lock makers) and other crafts
Walk through the labyrinth of the calli in the Dorsoduro sestiere, following the original toponymic town of the Nizioleti, which in Venetian means “little sheets”.

Visit to the squero where the gondolas are built and to the workshop of a ‘remer’, an artisan who makes oars and oar-hooks. The route continues on to the Fondamenta delle Zattere where boats loaded with timber, grain and wool used to arrive from both the plain and the mountains by sailing along the course of the rivers.
Traditional dinner in one of the typical bacari, Venetian taverns.

Return by bragozzo and arrive at the island of San Servolo to explore its history rich in incident and shifting fortunes: it was a convent, a psychiatric hospital and now it is a cultural venue. Leaving the island of Giudecca, continue to sail towards Fusina where the boat leaves the lagoon and goes up the river Brenta.
In Malcontenta you can go through the gate of one of the most beautiful of Palladian villas, the Villa Foscari, also known as the Malcontenta, to look at its frescoes and catch a glimpse of the river between the fronds of the weeping willows from its large windows.
The navigation continues along the ship crossing locks and mobile bridges. Along its banks are hundreds of villas and beautiful gardens that overlook you. The hundreds of stories you can hear about them testify to the greatness of the Venetian Republic and Villa Culture, which was an important socio-economic transformation connected to land-reclamation and agriculture.

By boat to Padua

From Mira to Padua – Romantic mills and majestic Venetian Villas

Take the boat back along the Brenta River with its villas, boats and gardens, to the historic centre of Dolo, located on an island in the middle of the river. In the square, you can still find the ancient squero, the navigation basin and the mills, now a renowned restaurant, where at the song of the water, there is a stop for lunch.
Get back into the bragozzo and continue to Villa Nazionale Pisani, a combination of 18th-century artistic excellence and historical representation, where you can stroll in the extraordinary park, inspired by Versailles. Next to Villa Pisani is the seventeenth century complex of Villa Foscarini Rossi, home to the Rossimoda Footwear Museum, which tells the story of the footwear tradition in the Riviera del Brenta.
In the late afternoon you arrive in Padua where you stop for the night and dinner.

The splendor of the city of Carraresi
Stroll under the arcades, in the streets and squares of the historic centre within the city walls and listen to the history of Prato della Valle and the Church of Sant’Antonio, Piazza dei Signori, Piazza dei Signori, Piazza of Erbe and Piazza dei Frutti, Caffè Pedrocchi and Palazzo del Bo. Padua is one of the oldest university sites in the world. In Piazza Eremitani you can enter the Scrovegni Chapel and immerse yourself in all the excitement of Giotto’s fourteenth-century art.
You will still have free time to visit some more monuments, to stop for lunch in a typical local bar, and to do some shopping.
Greetings and departure. 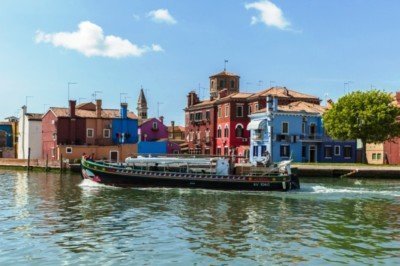 Here are the SlowVenice Partners you will meet during your travel experience with us:

The Venice Certosa Hotel is an exclusive resort located on the Certosa Island, just 15 minutes by waterbus from Piazza San Marco.
The hotel offers you the experience of a unique stay in Venice, a captivating city of water, immersed in the tranquility of a park in the lagoon, a natural heritage of rare value a few steps from all the islands. The Hotel offers modern rooms with continental breakfast and bar, lounge, restaurant, meeting and conference rooms, shuttle and private transport.

Here to find out more about Certosa Hotel

Villa Alberti is an eighteenth-century residence, a leading player in the fascinating history of Venetian nobles, combining Venetian architectural tradition with the comforts of a hotel.
Savour breakfast made with genuine, fresh produce in the exclusive historic park protected by boxwood hedges and under the shade of centuries-old trees that make for a unique ambience of peace and relaxation.

Here to find out more about Villa Alberti

Copy this text in the field below

Choose whether to be accompanied by the tales and professionalism of our guides for the entire duration of your stay, or for a few days, or just for individual excursions, or simply follow the tours independently using the directions and suggestions included in our travel book especially prepared for you!
Experience new thrills and immerse yourself in the magical combination of unique elements and sensations. Let yourself be carried away by the never-ending surprises that only the essential Terre di Venezia and its lagoon can offer you.

Customize your stay!
Choose whether to be accompanied by the tales and professionalism of our guides for the entire duration of your stay, or for a few days, or just for individual excursions.

Let’s try to build together your “experience” in Venice