Maria Boscola: a flag for Venice

One of the most typical traditions of Venice is rowing, which has always been characterized also by women.

The woman in fact had a place in the celebrations of the Serenissima: the first race was in 1493 during the visit of Leonora, wife of Duke Ercole I of Ferrara. Moreover, women enjoyed the same admiration and prestige as men: the prize money for the victory was in fact the same.

This is a characteristic that distinguishes Venice from the rest of Italy: in fact, in Latin culture it was not common for women to participate in sporting competitions. Considering instead the vocation of the Serenissima to turn towards the East, it is rather conceivable an impulse deriving from Greek culture.

In Venice as in Greece, in fact, rowing was common in all social classes and also connected to ethical and religious values.

The history of Maria Boscola from Marina

The most famous Venetian “regatante”(woman who rowing) is Maria Boscola da Marina.

She won the first race when she was very young in 1740 and the last one in 1784 well forty-four years later, in what was the last regatta in which women participated before the fall of the Serenissima Republic.

A portrait of her remains in the Museo Correr in Venice with the flags won, but her life story is set in a unique context in the world.

Maria Boscolo was born in Marina of Chioggia and she was a vegetable grower. Maria learned to row, like many other farmers and fishermen, using the boat as a means of transport related to her work. 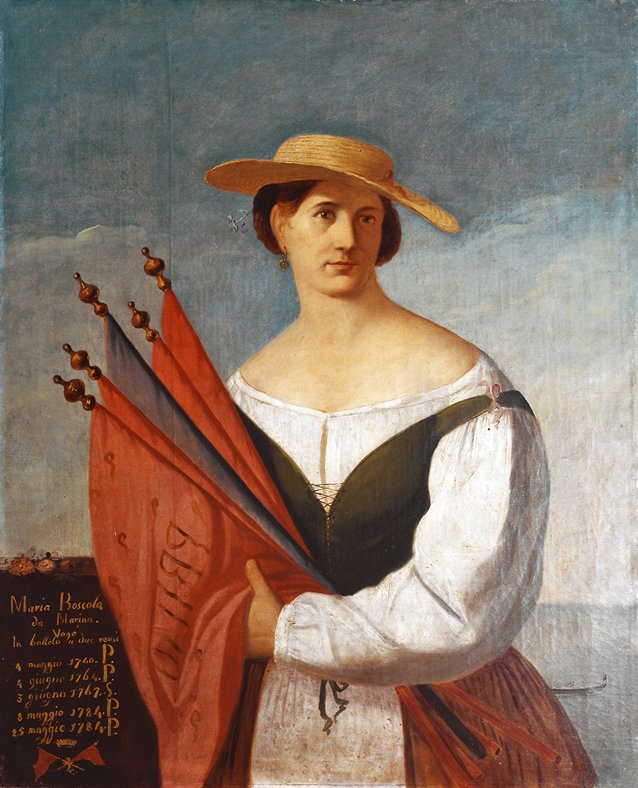 The people of the Lagoon began to compete with the oars to get to the market as soon as possible and sell their products at the best price. The competitions began spontaneously, linked to work, and between women and men that shared the same fatigue and the same knowledge of the currents, wind and other climatic conditions.

For this reason, until a few decades ago, the inhabitants of the islands won the regattas more than the citizens.

Today the sport of rowing is practiced by young people, women and men.

One of the most spectacular competition is the Women’s Regatta on Caorline, created in 1999 to transmit the passion for standing rowing to the younger generations, has reached its 22nd edition this year.

The 2020 edition will be held on March 8th International Women’s Day, a colourful and festive tribute to the strength of women.

Wine culture is inextricably linked to Venetian gastronomy. Let yourself be amazed while exploring vegetable gardens and vineyards nestling in the gardens of Venice and in the typical landscape of the islands of the lagoon.

Venice and the crafts of the ‘City of Water’

Three days to not yield to the stereotyped image of the city. If you are an attentive and thoughtful traveller, we can offer you the opportunity to explore and get to know true Venetian culture and the everyday life of those who live there.