In hidden Venice: the experience of Mary, journalist and travel writer

Venice may be feeling the effects of overtourism, but there’s still peace and quiet to be found.

Venice is afflicted with news on excessive tourism, unhappy places and selfie sticks, it is easy to wonder if Venice has been loved until death. To find out the real Venice and  discover a quieter side of the most visited city, our local guide were requested by journalist and travel writer Mary Novakovich.

Mary Novakovich in her journey in Venice discovers how to slow down and see the city and its Lagoon in a whole new light. 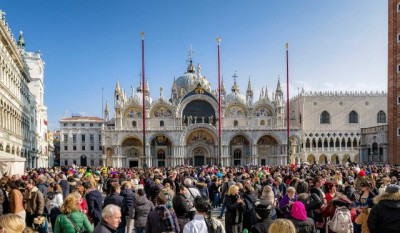 Piazza San Marco/St Mark’s Square is not the place for a ‘slow Venice’ experience. Photo: jarino47/iStock

Venice is heaving. It’s a victim of its own popularity—on any given day, tourists outnumber the shrinking resident population of 55,000. Everyone wants to come here, and we continue to go, helplessly drawn to the city’s incomparable beauty.

Some visitors are less welcome than others. Although cruise ships were banned from the Grand Canal, you can still see the monsters rolling through the Giudecca Canal. Thousands of ship passengers swarm through the narrow streets of San Marco, and even an attempt at installing turnstiles during major holidays to allow locals to move about more easily did little to stem the flow. Those Venetians who haven’t yet been priced out of their city feel under siege for most of the year.

Despite all of this, I can’t keep away myself. But I do know that if I want to stay sane, I have to get away from the crowds and perhaps do things differently. And luckily, that’s easily done.

Our guide Martina were waiting for the journalist around the corner of Piazzale Roma. Our first experience were in a special boat with its skipper, Paolo.

Martina and the whole SlowVenice’s team have a mission to show people that there’s more to Venice than being trapped in slow-moving crowds.

Our first stop is the island of San Francesco del Deserto, where a 13th-century Franciscan monastery and cloisters sit in a wonderfully tranquil spot

surrounded by landscaped gardens. From there you can see the island of Burano the island of Torcello, the first of the Lagoon islands to be populated during the Dark Ages. Its seventh-century Byzantine cathedral has some of the Western world’s finest mosaics, and its 11th-century bell tower has superb views across the Lagoon.

Come and see another side of Venice. A wilder, quieter side.

The simple beauty of our bragozzo, a 19th-century fishing boat, with its highly polished wooden bridge, vivid yellow deck and a red and black hull. With its flat bottom, it’s made for a lazy chug around the remarkably shallow Venetian lagoon, reaching parts other boats can’t reach.

I find it hard to believe that Torcello was the beating heart of Venice back in the fifth century. I climb the 11th-century bell tower to take in the views and see that we’ve barely scratched the salty surface. The lagoon seems to go on forever.

Walking around the island’s main square, I find it hard to believe that Torcello was the beating heart of Venice back in the fifth century. Now it’s an agreeably drowsy place—at least on my out-of-season visit—with a seventh-century Byzantine cathedral. I climb the 11th-century bell tower to take in the views of the island and surrounding marshes and mudflats of the lagoon. I see that we’ve barely scratched the salty surface. The lagoon seems to go on forever.

By now I’ve become used to the ethereal atmosphere out here in the lagoon—a sense of being in a watery wilderness.

Instead of church spires and fishermen’s cottages of Burano, I see deserted marshy islands and brown mudflats. It’s bleak but hypnotically beautiful. We go beyond the limit of the wooden stakes that mark the channels and into a seemingly empty world.

Many thanks to Sawdays and Mary Novakvich to tell our experiences to discover a quiet and real Venice.